By Admin
June 08, 2014newsrelationshipsshowbiz
After 13 years of marriage, Aga Muhlach and Charlene Gonzales decided to call it quits due to a third party, according to the grapevine. 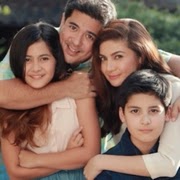 Rumor has it that the celebrity couple had a confrontation where the actor admitted his relationship to a still unnamed woman, a 20-year-old dancer.

Charlene allegedly made a decision to end their marriage, but a product endorsement made it very difficult for them to split. They reportedly decided to stay together under one roof but sleep in separate rooms.

Neither the wife nor the husband officially spoke about the issue, but a news website published an article saying there's no truth to the speculations. In fact, the report mentioned that the couple celebrated their 13th wedding anniversary last May 28.

In her Instagram account, the former beauty queen posted thank you messages for the greetings and fan-made photo collages. Other reports say the couple had dinner for the celebration.

Did Aga Muhlach and Charlene Gonzales separate? A report on ABS-CBN's "The Buzz 15" to be aired on Sunday, June 8, might provide answers.

Update: "The Buzz" aired this video which Aga shared: