By Admin
May 03, 2014newsphoto scandalshowbiz
A scandalous selfie photo of 'Spiderman' star James Franco has gone viral. The actor posted it in his Instagram account but deleted later. 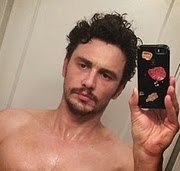 Various reports say the racy picture, which shows James pulling down his underwear to show his goods infront of a mirror, was uploaded Thursday night, May 1, 2014 at 11:28 PM ET.

He took the image down after a few hours, but several entertainment news websites and some of his IG followers were already able to download and secure a copy.

The actor, who is allegedly addicted to selfies and social media, was also involved in a photo scandal with a teenage girl last month. This time around, industry observers said he had "gone too far."

Some netizens wondered why the James Franco Instagram selfie scandal photo was captioned "JUMP ROPE." Only the guy knows.