By Admin
May 09, 2014facebooknewsonline scamtechnology
The spammy post about Facebook accounts deactivation on May 18 is a scam that targets Filipinos, notes an anti-malware software maker.

Recently, many Facebook users received a notification announcing that the social network has encountered "problems" and its chief executive officer, Mark Zuckerberg, has allegedly given the go signal to "deactivate all accounts" effective that date.

The spam post includes five steps one has to supposedly make in order to avoid deactivation.

Posts of this type aren't new, but Malwarebytes Unpacked says "what sets this apart is what appears to be the core target of the scam: most of them are Filipinos." The site added that "‘Like’ harvesting and profiting via link visits" are the objectives of whoever created it.

The steps included instructions for a user to copy a particular code from PasteBin and paste it into a browser's console. 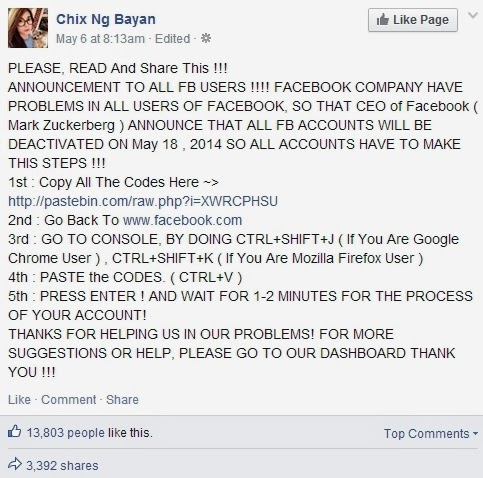 According to online scam watchdog Facecrooks.com:

Anything in Facebook that prompts or lures you into pasting a code / URL into your browser is a sure sign of a scam.

In a post titled "The Ultimate Guide to Facebook Scams," the website explains that "pasting such code in your browser will automatically run a javacript command [which is against Facebook Policies as it could contain malicious codes] on your account or direct you to a malware infested page."

How to avoid getting infected?

If you happen to receive a notification about the alleged impending Facebook accounts deactivation, immediately report the post as spam or simply ignore it. Do not fall victim to cybercriminals.