By Admin
May 30, 2014newsshowbiz
Brad Pitt was punched by a notorious celebrity prankster at the red carpet premiere of "Maleficent," his wife Angelina Jolie’s Disney film. 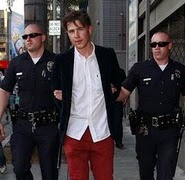 Reports said the actor was signing autographs when he was attacked by Ukranian journalist Vitalii Sediuk, the same man who attempted to kiss Will Smith in the past.

The inappropriate incident took place at the El Capitan Theatre in Hollywood on Wednesday, May 28. Although initially slightly shocked, the couple was unfazed and continued to grant interviews.

Sediuk was held by security personnel until police officers arrived. The alleged assailant was arrested and taken to the Los Angeles Police Department's Hollywood jail where he was booked on suspicion of misdemeanour battery, pending a $20,000 bond.

The 25-year-old was already fired from his job before he got Brad Pitt punched. A spokesman for Ukrainian television channel 1+1 told international media that the TV network denies involvement in Sediuk's antics.