By Admin
April 10, 2014newsvideo
A CCTv video footage showing a gay thief stealing money from the cashier's table at a bistro in Iligan City has gone viral on Facebook. 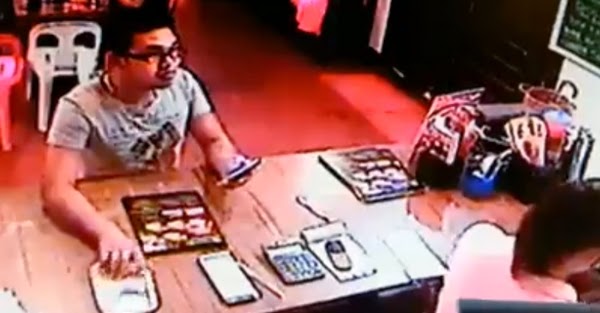 The suspect took from the silver platter a peso bill intended as payment of a customer at Pizzarella Bistro, a famous pizza place and restaurant situated in Barangay San Miguel.

His evil plan was foiled after the attentive cashier caught him in the act and told him to return the cash. Smiling, he quietly left the bistro as if nothing happened.

Some commenters, who identified the thief as a certain "Mark," posted that he is notorious for stealing tech gadgets such as smartphones and tablets.

Post by Jeremiah Villanueva Portado.
The uploader warned local residents and encouraged them to be vigilant against the gay thief, who allegedly frequents other establishments including Cozy Cup, Cham's, and BJ's Steak House to look for victims.

The viral video, which was uploaded last March 31, already garnered thousands of Facebook likes and shares.