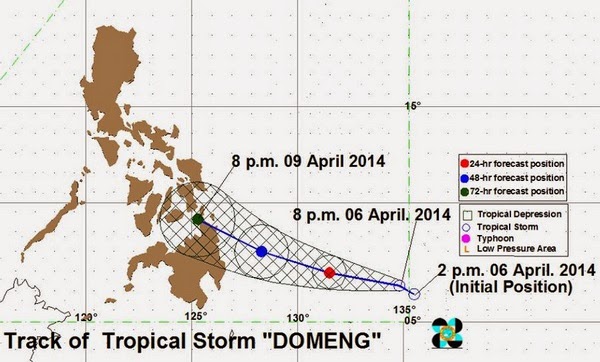 At 11AM today, TS Domeng has maintained its strength and continues to move in a West Northwest direction.

The tropical cyclone was spotted at 770 kilometers East of Davao City with maximum sustained winds of 65 kilometers per hour near the center and gustiness of up to 80 kph.

It is forecast to move West Northwest at 15 kph.

State forecasters said the estimated rainfall amount is from 5 to 15 millimeters per hour (moderate to heavy) within the 400-km diameter of Tropical Storm Domeng.

According to PAGASA, Mindanao and the regions of Eastern Visayas and Cagayan Valley will have cloudy skies with scattered light rainshowers and isolated thunderstorms. Metro manila and the rest of the country will be partly cloudy to cloudy with isolated rainshowers or thunderstorms mostly in the afternoon or evening.