Reports said the 25-year-old actress and fashion blogger got engaged last March 29. The guy popped the surprise question while they were taking souvenir pictures in Japan. 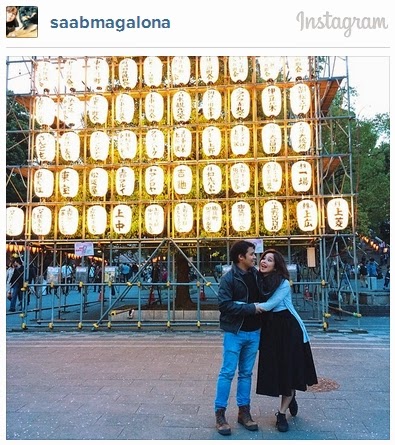 I thought we were just taking photos and then he said he wanted to ask me something. This is my "ha?" face. I can't believe I'm now engaged!!! I LOVE YOU@jimbacarro. thank you for proposing in my dream destination (Japan) and in front of my family (who took so many photos and videos hahaha). So much love!!

Her sister Maxene posted a photo with greetings:

She said yes! Congratulations, Saab and Jim! You guys were made for each other.

Last Wednesday, April 2, Maxene also uploaded a video of the actual proposal with a caption that reads:

Oh, and Tokyo will forever be memorable for our whole family bec of this very special moment. Congratulations once again to @saabmagalona and my soon to be brother-in-law, @jimbacarro! I love you both so much and I know deep in my heart how much you guys are so meant to be. I can't imagine a person better suited to be my sister's husband than Jim. Can't wait to see your future babies!!!!

The engagement of Saab Magalona to Jim Bacarro followed that of another celebrity, Bianca Gonzales, which happened at the airport before the TV host-actress left for London.