PBB All In to hold final auditions on April 15 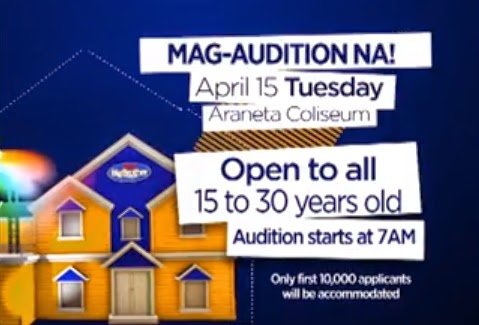 According to a video announcement released Wednesday, the auditions will give hopefuls aged 15 to 30 years old their last chance to become regular season and teen housemates.

It will start at 7am and only the first 10,000 auditionees will be accommodated, the Kapamilya network said.

The show's director, Lauren Dyogi, revealed on Twitter last month that PBB All In will air updates in the afternoon via Uber. Besides its primetime telecast on weekdays, two shows will also be featured online to maximize multimedia platforms.

Same as its first season, the upcoming reality show will last for 100 days. Dyogi said it will be hosted by actress Toni Gonzaga and ex-housemates Bianca Gonzalez, Robi Domingo, John Prats as well as Slater Young.

PBB All In will mark the 11th edition of the program since it premiered in August 2005, ABS-CBN added.