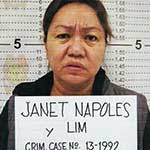 In a press conference held at the Ospital ng Makati, Napoles' doctor said the two-hour operation, which he described as "uneventful," began at 8am and ended at 10am.

According to the doctor, her uterus had a lump developed over several months which led to pain, hemorrhage and anemia.

The doctor called Napoles' disease as severe adenomyosis of the uterus with multiple adenomyomata, a tumor of the uterus. Contrary to earlier medical findings, her condition has become "life threatening."

The businesswoman's vital signs were reportedly stable after the surgery. The doctor added that even without the uterus or ovaries, a woman at 50 will be as normal as ever.

Prior to her operation, Napoles had a meeting with justice secretary Leila de Lima who said that the alleged scam artist executed a sworn statement and confirmed the involvement of senators Juan Ponce Enrile, Jinggoy Estrada, and Bong Revilla in the corruption scandal.

De Lima revealed that Janet Napoles also expressed her desire to turn state witness, but the DOJ secretary clarified there was no commitment or deal yet.