Vice Ganda: I did not buy my Best Actor trophy from PMPC

By Admin
March 14, 2014newsshowbiz
Vice Ganda, who was declared Actor of the Year at the recent Star Awards for Movies, stressed that he didn't buy his Best Actor trophy.

Yahoo! Celebrity Philippines reports that the "Girl Boy Bakla Tomboy" lead star insists his conscience is clear. He only thanked the award-giving body but declined to comment further. 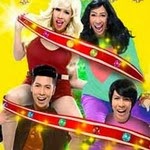 The comedian-host reportedly said he won't return the award despite the controversy.

On March 10, a day after the awarding ceremony was held, veteran showbiz columnist and radio personality Jobert Sucaldito fired a barrage of tweets accusing members of the Philippine Movie Press Club of vote buying.

Jobert claimed he was fooled after he commissioned 22 members of the 38-man voting committee but his ward, Jeorge Estregan (Laguna Governor ER Ejercito), still lost to Vice Ganda.

The actor-politician, on the other hand, acknowledges that he did not win.