By Admin
March 07, 2014newspork barrel scam
The Palace said the justice department is already studying the possibility of Janet Lim-Napoles being transferred to a regular detention facility if the court makes such an order.

Senator Francis Escudero has been calling for Napoles’ transfer to an ordinary jail since the government could not extract any substantial information from her that could shed light to the P10-billion pork barrel scam. Napoles is accused of masterminding the multi-billion peso scam. 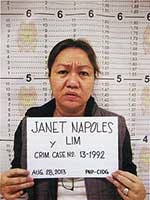 With regards to the request of Napoles to have a check up at St. Luke’s, Valte said that during her first medical assessment, she was granted by the court to allow her doctors to be present during the examination.

“The first check up that was granted by the court, her doctors were allowed to be present. So, she had medical professionals of her own choosing present at the PNP General Hospital,” Valte said.

She said they will leave it to the DOJ whether to oppose or allow Napoles to be assessed in a hospital of her own choosing.

Prosecutors alleged that Napoles, through connivance with lawmakers, initiated a scheme to siphon billions of pork barrel funds for their personal ends.

The DOJ has already filed cases against lawmakers involved in the scam in the Office of the Ombudsman.