By Admin
March 19, 2014newsshowbiz
The love team of Daniel Padilla and Kathryn Bernardo won't last forever. Fans will eventually get tired of the hit tandem over time. 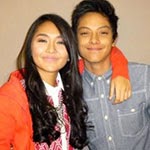 Undoubtedly the most famous love team of their generation, Daniel and Kathryn have been labeled as the teen king and queen of Philippine showbiz.

Collectively known as "Kathniel," the love team's television shows and movies were patronized by their diehard followers, their fans love and adore them, their names and primetime series became trending topics on Twitter almost everyday from beginning to end, and offers for commercial endorsements and projects just keep on coming.

All of it are destined to wane or fade away. Why?

Daniel and Kathryn might go solo or be paired with other teen stars.

Rumor has it that the young actor will have a new partner in the person of pretty newcomer Liza Soberano, although there was no confirmation from Star Magic. Their chemistry was reportedly noticed in "Got To Believe" which ended recently.

Another reason is age.

Both of them as well as their fans will be older because no one, not even the richest and most powerful people in the world, can stop the hands of time.

Daniel is turning nineteen on April 26 while Kathryn will be officially introduced to the society as a young lady next Wednesday, March 26. Several years from now, it is expected of "Kathniel" and their diehard fans to mature and by that time, they will all have other priorities in life.

Look at what happened to Romnick Sarmenta and Sheryl Cruz. Back in the 1980's, they were the hottest celebrity pair. They were very famous and their popularity was as extreme as Kathniel's now. Ask your mom or grandma about them, they will surely agree. But still, they parted ways and are now living separate lives.

Many fans of Daniel Padilla and Kathryn Bernardo will surely hate, unlike this post. But it's the truth and most often than not, the truth hurts.