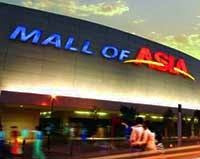 Ryan Bansawan, a 23-year-old South Cotabato native, reportedly told investigators that Bryan Luminda, a certain Jayson and a Justine were his companions when they smashed jewelry display counters and fired shots at the ceiling of the mall to create panic among mall goers.

Manila Bulletin reports that according to initial investigation, at least 8 to 10 men were behind the mall robbery.

The suspects stole around three million pesos worth of assorted jewelry from The Jeweller Kiosk. The value of jewelries taken from the F&C Jewelry Kiosk have yet to be disclosed.

One of the suspects was hit after engaging in a shootout with police, but has managed to escape after mixing with people coming out of the famous shopping store.

Bansawan, who was reportedly arrested inside Tokyo Tokyo Restaurant by a SWAT team, has been detained. He is facing charges for robbery with frustrated homicide, attempted homicide, and illegal possession of firearm and ammunition, the report said.

A manhunt operation to find the other "Martilyo Gang" members is underway.