By Admin
February 06, 2014newsshowbiz
Phil Younghusband has allegedly admitted that he got Denisse Oca pregnant. A screenshot photo of his supposed tweet has gone viral online.

Several online sources say the controversial tweet, which instantly garnered 78 retweets and 100 favorites, was immediately deleted. However, apparently some netizens were able to save a screen grab prior to its removal from his feed. 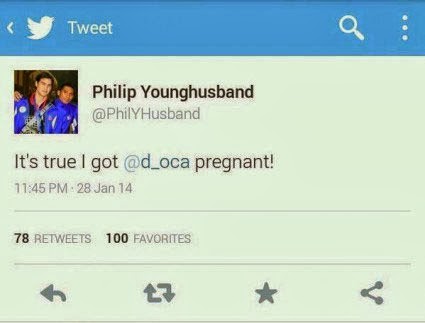 Responding to a query from one of his followers, the footballer denied he posted it.

@TanRoxanne No its not true. I did not tweet this.
— Philip Younghusband (@PhilYHusband) February 5, 2014

Phil’s alleged tweet further amplified speculations that he is the father of Denisse’s baby. Rumor has it that the latter’s pregnancy is the reason behind his break up with “The Legal Wife” star Angel Locsin. The actress has yet to comment on the issue.