By Admin
January 01, 20142014localnewsstamptopYear of the Horse
Special 2014 Year of the Horse stamps have been released and made available to the public, according to the Philippine Postal Corporation. 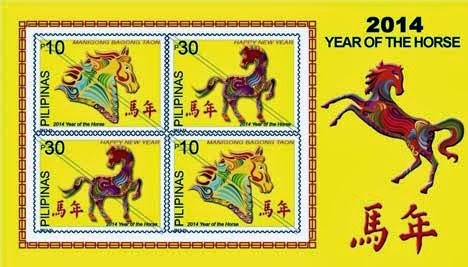 PHLPost in a statement reportedly said the postage stamps, first issued last December 2, were released in the observance of the Chinese zodiac.

The Year of the Wood Horse officially starts during the Chinese New Year, which begins January 31 and lasts until February 18 next year.

Sketched by PHLPost in-house layout artists Jan Michael Manuel and Jose Antonio Jayme, the P10 stamp is printed with a stylized head of a horse while the P30 postal instrument features a stylized horse.

Limited edition 2014 Year of the Horse stamps are also available for P80.