Pope Francis is 2013 Person of the Year - TIME magazine 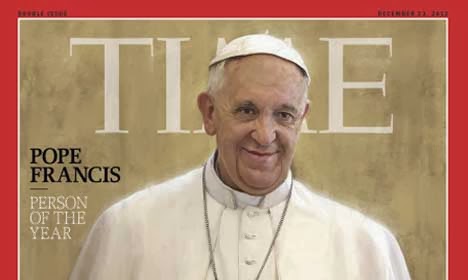 “For pulling the papacy out of the palace and into the streets, for committing the world’s largest church to confronting its deepest needs and for balancing judgment with mercy, Pope Francis is TIME’s 2013 Person of the Year,” said Nancy Gibbs, Time managing editor.

The Catholic Church leader “has placed himself at the center of conversations in our time in aspects of wealth, fairness, poverty, justice, transparency, modernity, globalization, the role of women, nature of marriage and the temptations of power,” she said.

Gibbs also emphasized that Pope Francis, who is also considered as “The People’s Pope,” captured the imaginations of millions who had almost given up their hope.

Pope Francis, the first Jesuit to be elected pope, is the third pope chosen by the magazine to be named Person of the Year. The first two popes given honor by Time were Pope John Paul II (1994) and Pope John XXIII (1963).