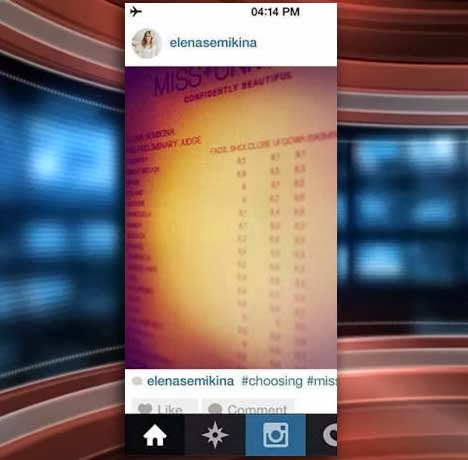 The viral photo was first posted on the pageant-related community forum Missossology. It apparently bears the Instagram handle @elenasemikina, which purportedly belongs to one of this year’s preliminary judges, Miss Universe-Canada 2010 Elena Semikina.

Based on the “leaked” Miss Universe 2013 preliminary result, the leading candidates are as follows:
The remaining beauties in the alleged Top 16 list, who will compete for the final Top 10 slots, are no longer visible on the picture.

Reports said the Instagram post where the controversial picture was attached is already nowhere to be found on @elenasemikina’s timelime on the photo-sharing site.

There were speculations that Semikina, also an actress in her homeland, was told to remove the image by, among others, the Miss Universe Organization.

Following the supposed leak, some netizens on social media doubted the authenticity of the viral photo, believing it was fabricated to allegedly sabotage the pageant now that the coronation night is getting nearer.

The Miss Universe 2013 pageant will be held on Saturday, November 9, at the Crocus City Hall in Moscow, Russia.