By Admin
November 17, 2013Bagyong YolandaglobalIglesia ni Cristonewssuper typhoonTacloban Citytop
No official statement. Iglesia Ni Cristo is silent on the allegation it refused to shelter victims of Typhoon Yolanda in Tacloban.

The controversy started after a Facebook user identified as Mai Militante posted:

Story of our staff from the Yolanda Typhoon incident... they were walking from estancia to balasan road... it was still raining and they were soaking wet, hungry, tired and dead scared... they stopped and thought they could rest at the churck of Iglesia ni Christo... but people from that church told them they cannot come in bcoz they are not members of that church... i was shocked with this story... as they say, “whay u sow so shall you reap.” Grabe… 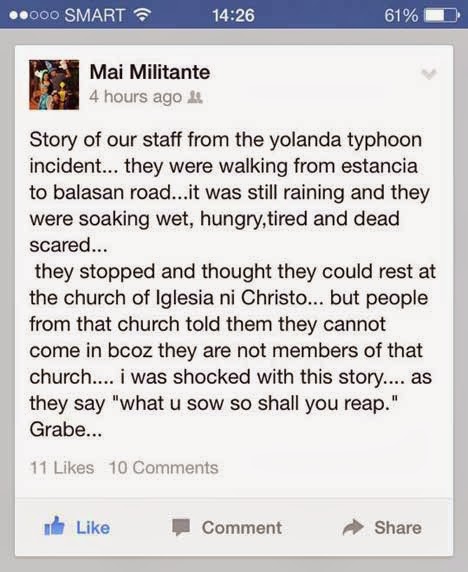 Thereafter, a blog called The Splendor of the Church, which is being run by Catholic priest Abe Arganiosa, published a screenshot of the viral Facebook post against the Iglesia Ni Cristo with a comment that says:

“It is striking that they have such an attitude when people are losing homes during the onslought of the Super Typhoon Haiyan [Yolanda in local name].”

The article apparently compared the INC chapel to the pyramids built by pagans.

“Take note, they pride themselves for having their chapel standing right after the storm. Good for them. However, a house of worship that is not a house of charity is evil,” the post read. “Like the Pyramids of the pagans they stand as lasting memorial of the emptiness of the Pharaoh’s heart.” 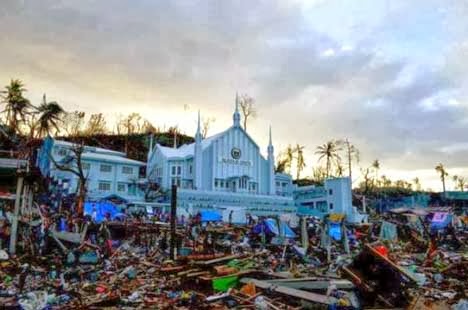 According to the website called Eagle News, the INC church building in Tacloban City “remained standing in the middle of the destruction caused by Typhoon Yolanda.” It claims the church housed survivors of the recent typhoon, although it appears they only allow INC members to enter the chapel.

Meanwhile, a blog site titled The Iglesia Ni Cristo called the Splendor of the Church article a “malicious and definitely not a credible report” because “it is not based on facts but on a text message.”

Citing a tabloid column, the blog said Iglesia Ni Cristo is a victim of “black propaganda.”


* * *
Our insight on this is that the heated debate about INC’s alleged refusal to shelter Typhoon Yolanda victims in Tacloban will escalate and the mudslinging will get worse unless the leadership of the religious group gives a word.