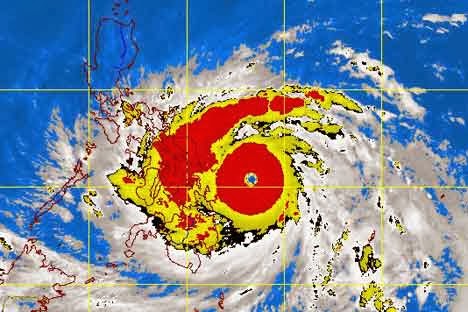 In its latest weather bulletin, PAGASA said Yolanda has accelerated and intensified slightly as it continues to threaten Eastern Visayas.

As of 9pm today, the eye of Typhoon Yolanda was spotted at 338 kilometers Southeast of Guiuan, Eastern Samar with maximum sustained winds of 225 kilometers per hour near the center and gustiness of up to 260 kph.

It is forecast to move West Northwest at 39 kph.

Yolanda, after hitting Guiuan or Abuyog, Leyte, is expected to traverse the provinces of Leyte, Biliran, Northern tip of Cebu, Iloilo, Capiz, Aklan, Romblon, Semirara Island, Southern part of Mindoro then Busuanga and will exit the Philippine landmass (on Saturday early morning) towards the West Philippine Sea, state forecasters said.

The estimated rainfall amount is from 10 to 30 millimeters per hour (heavy to intense) within the 600-km diameter of Typhoon Yolanda.