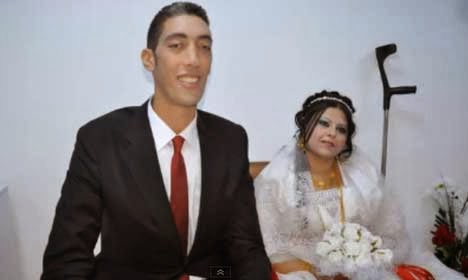 The couple’s wedding ceremony took place on Sunday, October 27, in the groom’s hometown in the southeastern province of Mardin in Turkey, Agence France-Presse reports via Yahoo! News.

“I cannot describe my feelings in words,” the 31-year-old Kosen reportedly told media in an interview. “I am the happiest man in the world.”

His 20-year-old bride, Mervi Dibo who is 2 feet and 6 inches shorter than him, added: “I hope this happiness will be long-lasting.”


According to the website of the state-run Anatolia news agency, six meters of fabric was used for the the groom’s customized black suit.

Kosen was declared as the world's tallest man by Guinness World Records in September 2009.