By Admin
October 02, 2013bikerdriverglobalNew YorknewsSUVtopViral Video
A group of bikers did attack an SUV driver in front of his wife and child. The incident took place Sunday along a New York City highway. 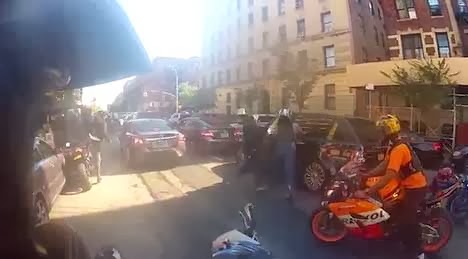 According to The Christian Science Monitor, the 33-year-old man was mauled by motorcyclists after he accidentally hit one of them in the vicinity of 125th Street.

The angry bikers smashed the driver’s Range Rover with a helmet that damaged its mirror on the driver’s side.

The victim struck two more bikers as he was fleeing. The chase reached more than two miles before the bikers surrounded the vehicle again and assaulted the driver.

He was rushed to a hospital and received stitches on his face, the report said.

Two days later, police reportedly arrested a biker, who was charged with reckless endangerment and driving, endangering the welfare of a child, and menacing.


The video of the incident has gone viral, garnering more than 3 million views on YouTube as of this posting.