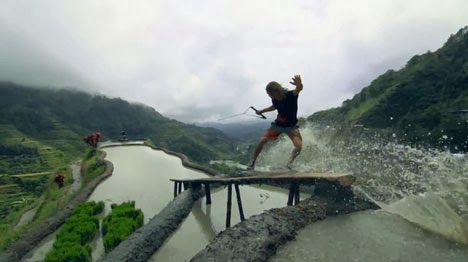 According to Rappler.com, Heritage Society president Augusto Villalon told international media that “wakeboarding at the terraces...is a stunt totally inappropriate to the site.”

The UNESCO “world heritage property and the local residents should not be exploited,” Villalon reportedly said. Banaue rice terraces is recognized globally as the 8th wonder of the world.

Red Bull energy drink, the sponsor of the event, explained in a statement:

“Respect for the environment was a priority from the beginning of this project! The team has assured that the plants and wildlife have neither been damaged nor disturbed at any time during the project. All agreements have been made together with the locals and under respect of their traditions and culture.”

Professional wakeskaters Brian Grubb from the US and Dominik Preisner from Germany performed the Banaue Wakeskating Stunt.

Wakeskating is a water sport adapted from wakeboarding.