By Admin
September 17, 2013EntertainmentGMAlocalMarian Riveratelevision seriestopWonder Woman
A photo that shows actress Marian Rivera wearing a Wonder Woman costume has gone viral. Does it mean the Kapuso star will play the character? 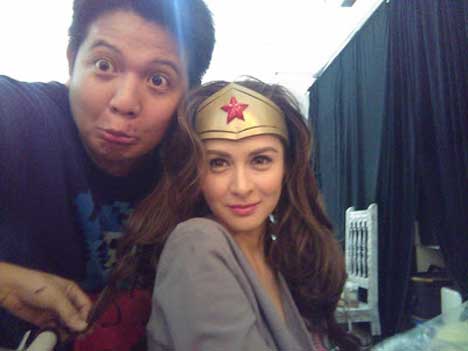 The picture, which was shared online by photographer Jay Tablante, drew curiosity among showbiz-oriented netizens.

In 2009, Marian had portrayed Darna, said to be the “rip-off” of the fictional DC Comics’ super heroine, on GMA-7, years before its rival network ABS-CBN acquired the exclusive broadcast rights for the Mars Ravelo classic.

Despite a lack of press release or promotional plug from her home network, Marian will most likely star in a Philippine version of Wonder Woman.

If rumors turn out to be true, the alleged fantasy-action series will possibly compete head-to-head with the Kapamilya network’s “Darna,” which is expected to be portrayed (due to “insistent public demand”) by Angel Locsin.

Everything remains speculation at this point while there’s no official word yet from GMA.