By Admin
September 11, 2013Kris AquinolocalMRTnewstopvideo
The “Queen of All Media” Kris Aquino took the MRT to avoid traffic along EDSA so she can make it to the “Lucky Me Awards Night” on time. 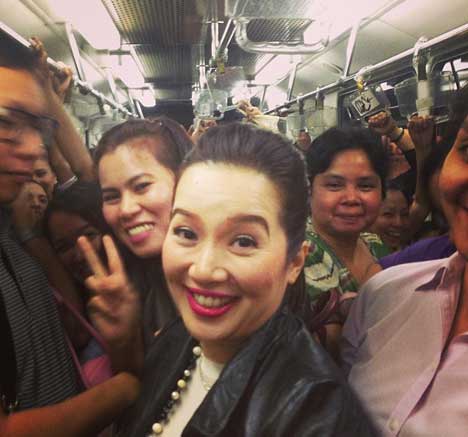 Stranded commuters and some motorists including celebrities such as Kris and boxing champ Manny Pacquiao were forced to take alternative means of transportation.

Reports said the television host was spotted posing for photos with some passengers of the metro rail transit. She also shared a selfie of her rare ride via Instagram.

A video showing the presidential sister at the MRT was uploaded on YouTube by “Kris TV” head writer Darla Sauler.


Several netizens on social networking sites said they noticed that Kris appeared to be having difficulty in breathing inside the train coach.