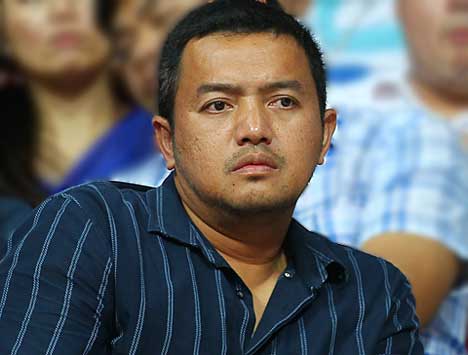 ADMU lost to DLSU 64-66 in that match held at the Araneta Coliseum on September 1st. After the game, Perasol nearly had a scuffle with Atayde, a member of La Salle class 1985, after the latter shouted words he obviously didn’t like.

Someone from the Ateneo team alleged that their coach was not only heckled, he was cursed. “Minura mura niya si coach,” he reportedly said. “Sabi nila: p***** i** mo! Nasan ang yabang mo ngayon?”

According to Rappler.com, Ateneo will file an incident report at UAAP commissioner Chito Loyzaga’s office on Tuesday, September 3.

For his part, Atayde claimed the heckling—when he allegedly sarcastically said “Perasol, salamat sa pagpapanalo mo sa amin”—was all part of the kantyawan. The La Salle alumnus reportedly said he was surprised when the Blue Eagles coach almost “attacked” him. Atayde added he’s ready to apologize.

It seems everything is going to end well.

“Let me express my apologies for my un-Atenean-like behavior I displayed in public yesterday. Couple that with our team’s loss to Lasalle. The better part of me should have avoided the confrontation by turning my other cheek. As it turned out, I was caught off guard and the worse (not yet worst) part of me prevailed.”