By Admin
September 06, 2013Car CrashEnglandglobalKent CountynewstopUnited Kingdomvideo
A 100-vehicle crash occured in the United Kingdom due to low visibility caused by a bizzare summer fog. More than 200 people were hurt. 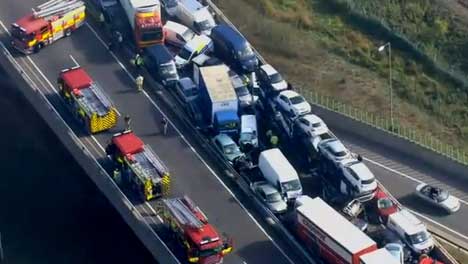 Thirty three of those hurt were taken to medical facilities and the rest received treatment at the roadside after a number of ambulances arrived on the scene with responders.


A Kent police official had said it was “fortunate” and “miraculous” that no one died in the 100-vehicle crash, which some witnesses described as “horrific.”