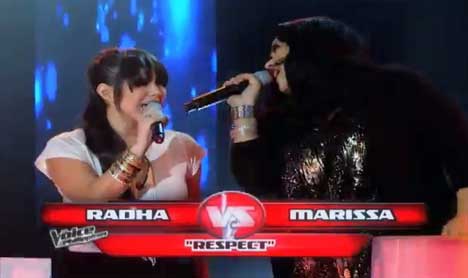 The show had sort of “saved the best for last” because clearly, the Radha versus Marissa vocal showdown was the “best battle ever.”

The two pros gave justice to the Aretha Franklin song “Respect” and even made their rendition better than everyone else’s cover. It was the first time that a battle round performance received a standing ovation from coaches and the studio audience.

The Voice coach Lea Salonga praised both singers “for giving this studio something to remember.” The Broadway star said she didn’t think either of the artists had to be coached.

In the end, Lea chose the former Kulay band member to advance to the Live Shows of the singing competition.


It was history in the making, as far as the show is concerned, although this blogger thinks they shouldn’t have been paired. Both of them deserve to be in the finals.