Napoles 'detention', location leaked in US hours ahead of surrender

In a Facebook post on Wednesday, August 28 at “0200hrs (2:00 a.m.) Manila Time,” Celle said an “anonymous source” from the Philippine Department of Justice (DOJ) told him that “NAPOLES is detained in UNDISCLOSED LOCATION in approximately 200 kilometers North of Manila.”

According to Celle, the source said Napoles “has offered to become a WHISTLEBLOWER for the State Prosecutors.” The news anchor added that justice secretary Leila De Lima was “silent” and the Palace “remains tight lip” on “NAPOLES whereabouts, at press time.” 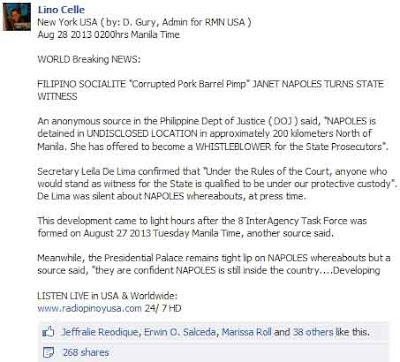 When US-based veteran broadcast journalist Gel Santos Relos asked Celle if the news was confirmed and who his “credible source” was, he replied: “I can”t compromise the sources’ personal security. I believe the sources because they never missed in the past!” 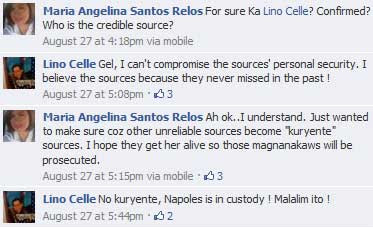 Past 9:00 a.m. on Wednesday, President Benigno Aquino III offered a P10 million bounty for the arrest of Napoles.

At 9:37 p.m. same day, Malacañang announced that Napoles surrendered to the President. Presidential spokeperson Edwin Lacierda had his own narration on how Napoles turned herself to authorities.

In a phone patch interview past 2:00 p.m. the following day, August 29, Celle confirmed his report to ANC’s “The Bureau” anchor Karmina Constantino.

Celle disclosed that after he got the tip from his “source” by phone, he called several friends in Manila to ask for updates before proceeding with his Facebook post.

During the interview, the radio anchor insisted he would “never” reveal the identity of his “source.”