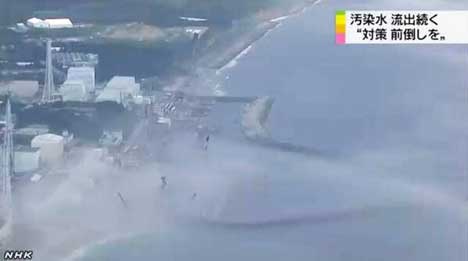 So, why is the sea ‘boiling’? The answer can be found on the NaturalNews.com report.

“After a 29-month cover-up, the Tokyo Electric Power Co (Tepco) is now calling for international help and has all but admitted Fukushima's radiation leaks are spiraling out of control. In addition to the leaking water storage units that are unleashing hundreds of tons of radioactive water each day, Tepco now says 50% of its contaminated water filtration capability has been taken offline due to corrosion,” the news website published Tuesday.

» ALSO READ: ‘Twerk’ and ‘selfie’ now in the dictionary

Meanwhile the sea is boiling on the coast of Japan from the runaway cores at Fukushima. THE FU**ING SEA IS BOILING!!! pic.twitter.com/gf6OMmDLDa
— Ching (@AnonChingShih) August 28, 2013

In an interview, nuclear energy industry expert Arnie Gundersen warned that the problem at Fukushima “is going to get worse.”