Janet Napoles has diabetes, but no request for hospital arrest yet says lawyer

An ECG or electrocardiogram is a test that records the electrical activity of the heart.

Netizens noticed that Napoles appeared weak and stressed in her mug shot photos, which were shown by authorities to media Thursday afternoon. 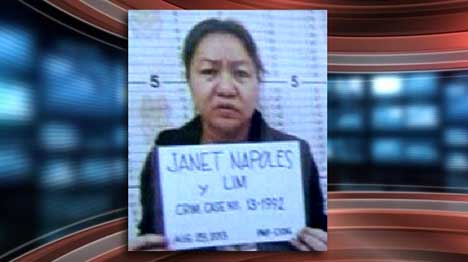 Napoles was transferred to the detention facility before midnight on August 29, more than twenty four hours after she voluntarily surrendered to President Benigno Aquino III in Malacañang Wednesday night.

The businesswoman, who is accused as the brains of the multi-billion peso “pork barrel scam,” was reportedly escorted by Special Action Forces when she was brought to jail.

In interviews, Roxas explained Napoles is not in a regular prison cell for “security reasons.” Meanwhile, Kapunan reportedly said their camp has no request for hospital arrest yet.

After images of Napoles’ transfer from Camp Crame to Makati City Jail were aired on television, netizens turned to social networking sites with mixed reactions.

Some criticized government for the alleged special treatment given to Napoles, while others suspect she will eventually be brought to the hospital.