By Admin
August 22, 2013Eduardo ValdiviaEntertainmentfacebookJames TaylorlocaltopViral Video
Instead of claps, a man who tried to make a video while performing his version of a James Taylor song received a nasty push from wife. 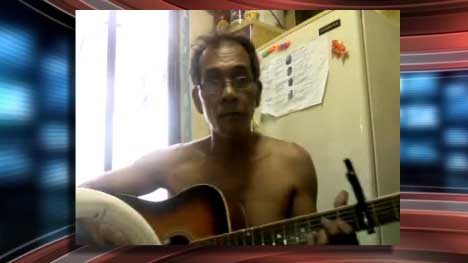 First uploaded by Facebook user Karl Froilan Valdivia in late July, the clip was shared more than 16,000 times as of this posting.

The Pugad ng mga Rakista at Metal Facebook page identified the singer-guitarist behind the viral video as Eduardo Valdivia.

While recording a cover rendition of “Fire and Rain,” Valdivia’s better half accidentally shoved him off the chair before taking a pitcher of water from the fridge.

The funniest part of the video was Valdivia’s reaction. Watch this: