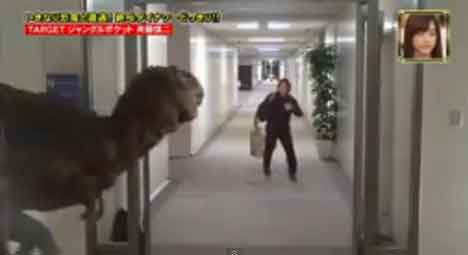 The first cut shows a man being chased by the realistic giant vertebrate in a hallway. The victim was so scared he fell five times as he tried to run away from the growling dino.

The second cut featured a sexy female teenager who was initially frightened, but soon realized the dinosaur was fake after she dropped on the floor and it kisses some parts of her body instead of eat her.


According to reports, several televiewers had negative reactions on the show saying it wasn’t at all prank but scripted takes based on video focus and angles, which suggest that not all cameras were really hidden. Others alleged the victims were just acting.