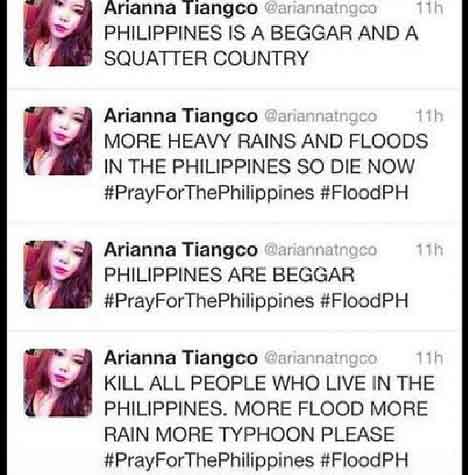 Tiangco, who allegedly created the account @ariannatngco to catch the public’s attention, instantly became a trending topic on the micro-blogging site nationwide on August 20.

In her tweets, Tiangco wished for “more flood, more rain, more typhoon” to hit the Philippines while the country is being devastated by heavy rains and flooding caused by Tropical Storm Maring and the Southwest Monsoon.

To top it all, Tiangco named the Philippines “beggar” and “squatter.” Some Filipinos lashed back and said she “messed with the wrong country at the wrong time.”

Tiangco, who claimed she’s from Italy, apparently uses a fake identity and her profile picture was stolen from Twitter user @xmarneyy, whose friends appealed to bashers to stop the verbal attack and cyberbullying.

This incident is reminiscent of what took place in August last year when a person claiming to be Marian Tan Daang created a bogus Twitter profile to imitate the fashion model.

The phony @shobemarian account posted “uncaring” and “insensitive” remarks against flood victims in Metro Manila and several areas in Luzon which suffered massive flooding caused by torrential rains brought by the Habagat.

The tweets, which were considered “offensive,” also sparked online outrage.

At the time, Marian said she was a victim of identity theft and urged everyone to block or unfollow her poser.