By Admin
August 09, 2013Anne CurtisEntertainmentlocalMartin Nieveramashupmusic videotopViral VideoWithout You
Anne Curtis and Martin Nievera have collaborated for a new music video that’s taking the internet by storm. “Without You” goes viral. 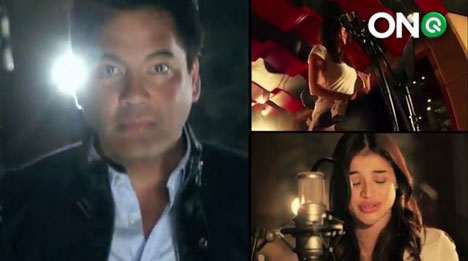 A mashup cover of U2’s “With or Without You” and David Guetta featuring Usher’s “Without You,” “Without You” is Anne’s first music video ever, which comes with another first—the actress doing a rap the Nicki Minaj way!

Besides looking really cute in the entire video, Annebisyosa sounds (and looks) like “Glee” star Lea Michele at some point, specially when she opens up her mouth to sing “woohoo...woohoo.”


According to Yahoo! OMG Philippines, the video was shot at the studio of musical director Marvin Querido, OnQ, which he considers as “a venue for ‘what ifs’ and ‘why nots’.”

During the interview, Marvin revealed they originally planned to do an acoustic version of the Guetta original with a string quartet, but finally came up with a mashup after talking to Martin.

“Without You” by Anne Curtis and Martin Nievera conquered Twitter’s trending box recently.

The music video also has more than half a million views on YouTube as of this posting and that number is expected to grow rapidly once mainstream media would feature it.