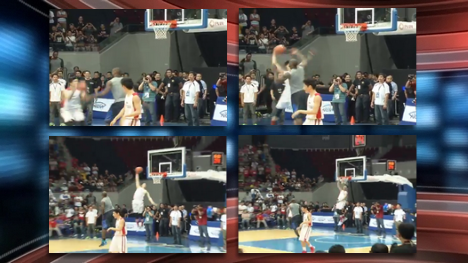 Locally famous for his dunks at high school tourneys, the 15-year-old La Salle Greenhills standout caught everyone’s attention, including that of foreign media among them ESPN and Yahoo! Sports, when he took the leap and slammed the ball in the face of the four-time NBA Most Valuable Player.

But of course, the Miami Heat forward was, as Yahoo! Sports’ Ball Don’t Lie puts it, “not-really-contesting.” After all, it was just part of the promotional basketball clinic and exhibition game.

After Kobe Paras dunked over LeBron James, the son of former 2-time PBA MVP and the first-ever rookie MVP Benjie Paras celebrated with co-players, as shown on the viral video (courtesy of ABS-CBN News).

Indeed, it was history...for the Filipino Kobe.