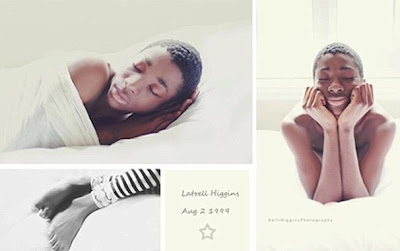 When Kelli, who was pregnant, told her husband and five children that she was planning to set up a photo session for the baby’s arrival, one of her kids suggested that they do the same for Latrell, who didn’t have baby photos himself.

Kelli thought it was “funny and a good idea” so she snapped pictures of his adopted son, posted it on Facebook and the rest is history. The photo has more than 12,000 likes and was shared more than 5,000 times as of Thursday.

But it’s more than just a viral photo. Their story has inspired people and had raised awareness on older-child adoption.

According to WebProNews, Kelli said it’s rare for older children to be adopted, but she and her husband decided to adopt Latrell and his younger sister, Chanya, even though they were already expecting a sixth child.

“These children, once they get past a certain age, they don’t find homes and they age out of foster care,” she reportedly said. “They have to figure out the world on their own and there’s no one to go back to as an adult. Where do you go for Christmas? It’s just horrible, it’s heartbreaking.”

In a recent interview, Kelli said some people had told her about their plans to adopt an older child instead of a newborn.