By Admin
February 09, 2013basketballfeatureglobalGreely High SchoolJewish communityMainenewsViral Photos
Three players of the Greely High School girls basketball team received disciplinary action after a disturbing photo, showing two of them making a Nazi salute and the other one accepting the greeting with a peace sign, surfaced online. 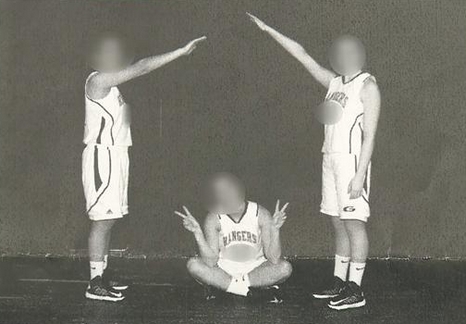 Reports said the Hitler-style gesture was supposed to be a joke, but school administrators did not consider it funny. A deeper investigation revealed that the students also posted “offensive” and “anti-Semitic” tweets, which added fuel to the fire.

CBS affiliate WLBZ reported that the girls expressed what they felt for a Jewish teammate through Twitter, saying “So Jewish to have prac on Christmas Eve day” and “If ___ picked me up, she would’ve made me do sprints, then put me in a gas chamber.”

Southern Maine’s Jewish Community Alliance executive director Emily Chaleff reportedly reacted and said: “When situations like this come up when students are using prejudiced and intolerant speech and actions, it shows that the school really needs to seriously institute anti-bias, anti-bullying education and curriculum.”

Because they are minors, the girls involved in the controversy were not named to protect their privacy. The nature of punishment was not disclosed although there were reports that described it as “short-term.”

In his letter to parents of the members of the basketball team, Greely High School Principal Dan McKeone said the girls “made a mistake, and they learned from it, and they’re moving forward.”