By Admin
February 20, 2013featureGamingglobalnewsThe Lord of the Rings: The FellowshipTyler Morris
A Michigan man won over $7.2M jackpot from a penny-slot machine at the Palace Casino on Friday after attending his friend’s funeral in Mississippi. 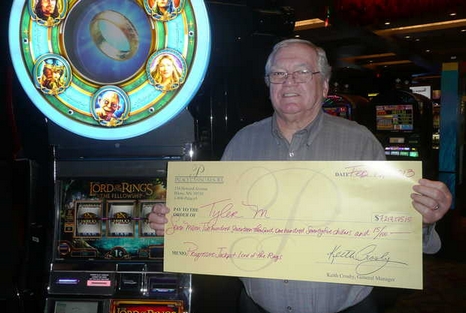 Quoting Lisa Quirch, Palace Casino advertising and PR manager, SunHerald.com reports that Tyler Morris of Montague won $7,217,175.15 by playing “The Lord of the Rings: The Fellowship.”

Quirch reportedly said “Tyler said he felt his friend was watching over him and had blessed him with the big win,” adding that Morris chose to play in this particular casino because his late friend also enjoyed playing there when he was still alive.

The winner’s wife Mary reportedly said they’re planning to use part of the winnings to pay off a car they’ve bought earlier in the week. Some of the money will be spent for the family as well as their weathervanes and house numbers manufacturing business, the report stated.

The lucky slot machine’s progressive jackpot has reportedly reset to $200,000.