Krista Miller speaks up, denies being Cesar Montano's other woman

By Admin
February 24, 2013ABS-CBNcelebrity scandalCesar MontanoEntertainmentKrista Millerlocalshow businessSunshine CruzThe Buzz
Following accusations that she is the third-party to the relationship of Cesar Montano and Sunshine Cruz and caused the celebrity couple’s separation, starlet Krista Miller finally broke her silence. 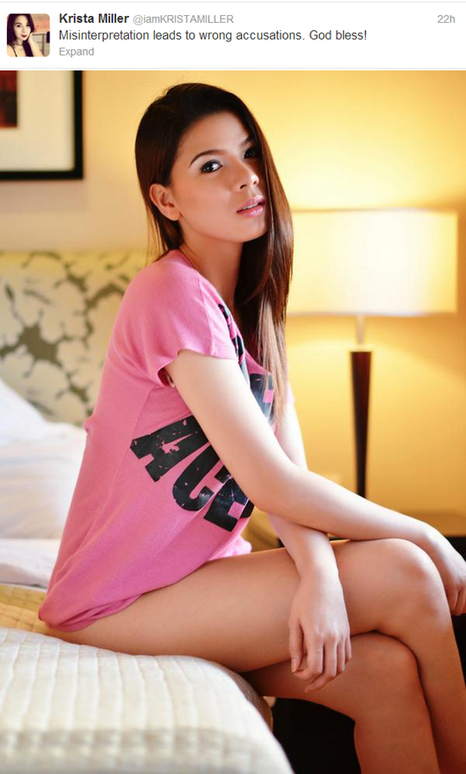 In a taped interview with Boy Abunda aired on “The Buzz” Sunday, February 24, the video of which lasted ten minutes, Krista refuted allegations that she is Cesar’s girlfriend.

The actress also denied the accusations hurled against her on Twitter and Instagram by Sunshine (who already dropped her Montano surname in her profiles on social networking sites).

When asked why she’s speaking up only now, the 22-year-old actress said she was focused on her work and didn’t have time to face the intrigues.

She denied having sent the actor-director “sexy photos and provocative messages” as alleged by his wife.

On the allegation that she received a pack of chocolates, a t-shirt and an iPhone which Sunshine bought for Cesar and the latter apparently re-gifted to her, Krista said she has suitors who can give her such presents. Krista said she can also afford to buy the said items.

Krista said Cesar did not court her nor she showed any motive to him.

Krista also addressed speculations that the issue was intended to create noise for the promotion of their movie.

The actress added that issues like this is normal in show business and she’s ready to face the controversies and challenges in her career as an actress.