By Admin
February 07, 2013contractfacebookfeaturePaul BaierRachel Baiersocial networkingtech news
Rachel Baier, a 14-year-old honor student who got hooked on social networking for two years, has offered her father, Paul, an interesting deal - to quit Facebook for five months for $200.

The Slideshow via Yahoo! News reports that the young negotiator successfully convinced her dad to grab the deal. To seal it, both parties agreed to sign a contract of agreement.

Rachel pockets $50 if she’ll not use Facebook until mid-April, $150 more if she resists the social networking site until June 26. Once the contract expires, she intends to spend the money to buy “stuff.” 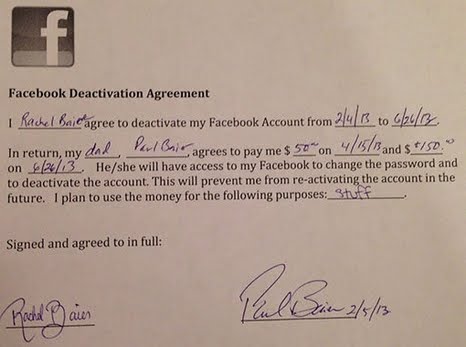 Meanwhile, Paul revealed everything was his daughter’s idea since she wanted to earn money while no one is asking her to babysit.