By Admin
January 15, 2013beggarfacebookfeaturefoodlocalnewspoorsocial mediasocial networkingtattootouristViral Photos
Don’t be deceived by a person’s appearance. A photo of a tattooed man, believed to be a tourist, providing a beggar food and feeding him using chopsticks, has gone viral online.

Some even said the man’s concern for the needy changed their impression towards people with tattoos. 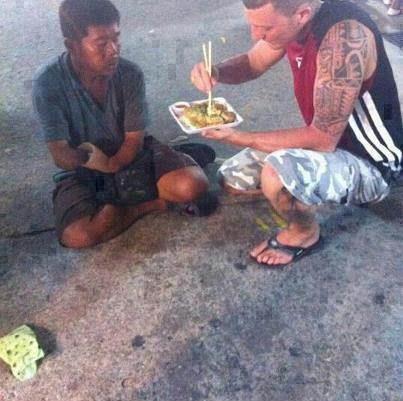 The viral photo has 38,000 Facebook likes, 1,400 comments and was shared more than a thousand times on the social networking site as of this posting. We found out, however, that this isn’t the first time it spread virally on the web.

Vietnamese blog “TalkVietnam” posted about it in June last year. It said the origin of the photo is unknown.

Commenters couldn’t say whether or not the poor man is a Filipino.