By Admin
January 18, 2013celebrity scandalCesar MontanoEntertainmentinstagramKrista MillerstarletSunshine CruzThe Mistress
Did Sunshine Cruz and Cesar Montano really separate? Rumor has it that the couple ended their relationship because of a third-party, a starlet named Krista Miller.

Reports said Sunshine bared in her Instagram account that her husband is having an affair with the other woman.

“I’m so sorry dear friends and family. I have been really quiet but when kids are affected unfair na yun. It is actually them who told me about this. They are hurt! I’m moving on. With my children. God bless you both for doing this to us,” she posted, according to reports.

The actress reportedly revealed that an A&F shirt, an iPhone 5 and some Ferrero Rocher chocolates, which she and her sister-in-law gave Cesar as present, were given by the actor to his purported mistress as gift. 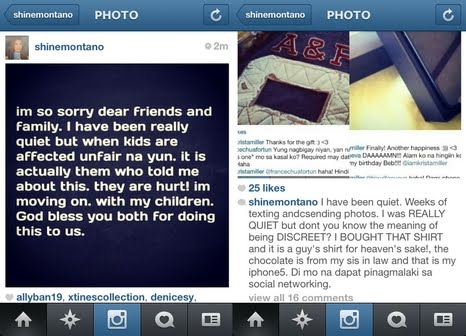 There was also word that Krista has been sending Cesar “provocative and sexy” pictures and text messages for weeks.

In one of her posts on the social networking site, the starlet said: “I hope one day, I’ll be your first priority.”

Krista’s Instagram account has been set to private after the controversial issue became a trending topic and her photos went viral online. 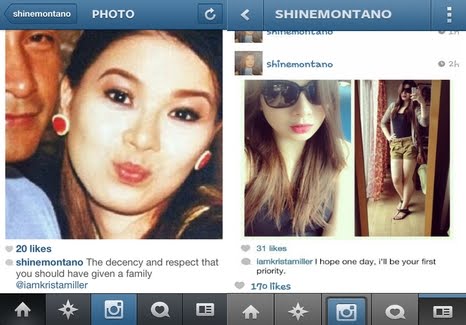 The couple has been married for more than twelve years now. They have three children.

The alleged 3rd-party plays Marita Zaragoza in the upcoming film “The Turning Cradle: The Untold Story of Alfredo Lim,” directed and starred in by Cesar.