By Admin
January 09, 2013ABS-CBNcontroversyEntertainmentfeatureGerald AndersonIna Kapatid Anak Book 2Kim Chiulocallove triangleMaja Salvadorshow business
The controversial issue about Kim Chiu, Maja Salvador and Gerald Anderson has become the talk of the town. Rumor has it that the best friends are not in good terms because of the actor.

Gerald is reportedly dating Maja, Kim’s confidante when her relationship with the actor turned sour three years ago. 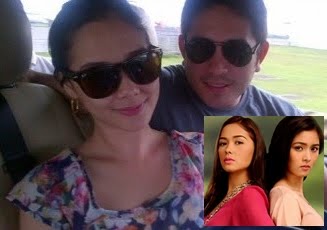 Kim was emotional when she broke her silence on the issue during Tuesday’s press conference for the ‘Book 2’ of ABS-CBN’s hit primetime teleserye “Ina Kapatid Anak.”

The Cebuana actress admitted that the turn of events caught her by surprise.

Kim clarified that she and Maja are not fighting over Gerald and are working together professionally to make their scenes in the series better. Ironically, Maja had asked her approval to date Gerald.

“The press or the people keep on asking me if I’m fine. Of course, I’m doing fine. Ang tagal ko nang naka-let go and ayaw ko nang magpakatanga,” Kim said. “Let’s be happy for the both of them.”

Recently, Maja and Gerald were spotted spending time with a group of friends at Misibis Bay Resort in Legaspi, Albay.