It's More Fun In The Philippines: LOVERS (Video)

The TV ad titled “Lovers,” aimed to attract tourists to spend the Valentine season in the Philippines, was first shown on ANC’s morning program “Headstart.”

In the video, a man proposes marriage to his girlfriend at the beach, popping the question while the words “Will You Marry Me” printed on four sailboats flash in the background. 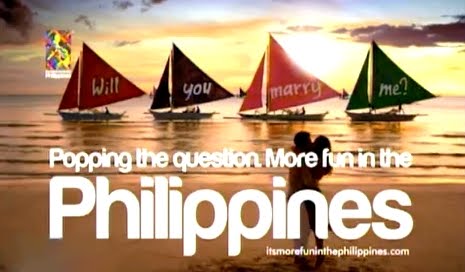 In a live interview with the show’s host, Karen Davila, tourism secretary Mon Jimenez said the new video is about a couple in Boracay and their journey of love.

Jimenez said Boracay is becoming a major destination for weddings, citing Korean tourists arriving there as couple. He added that the DOT hopes to cross the 5 million international tourists mark in 2013.

The video, which is expected to go viral within days, is embedded below.