By Admin
January 21, 2013basketballBobby Ray Parks JrDaniel PadillaEntertainmentKathryn BernardolocalPrincess and IRoyal ChampionshipTeam GinoTeam Jao
Kapamilya teen heartthrob Daniel Padilla had to be rushed to the hospital after he was accidentally hit by Bobby Ray Parks Jr. during an intense basketball game over the weekend.

Daniel led Team Gino against Enrique Gil’s Team Jao to win the “Princess And I” Royal Championship Game, 100-94, held at the SM Mall of Asia (MOA) Arena on Sunday, January 20. 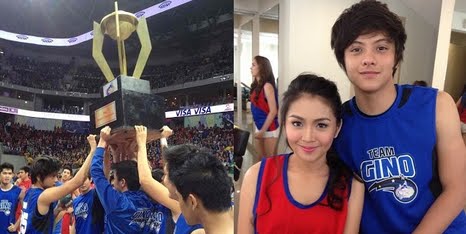 After making a crucial shot, Daniel was hit by Parks’ elbow when he tried to block the two-time UAAP most valuable player (MVP) from taking a jumper. Cameras captured a video of him spitting blood on the court. Reports said the young actor’s lower lip got stitched.

His loveteam partner, Kathryn Bernardo, in an interview said she was worried about what happened. The young star’s facial expressions showed her concern for Daniel.

The singer-actor was named Player of the Game along with a teammate, La Salle green archer Jeron Teng.