By Admin
December 21, 2012facebookglobalsocial mediasocial networkingtech news
Facebook may soon allow users to send messages to people not within their network for a fee. The company says it is testing a new service that will charge $1 to ensure that messages arrive in inboxes of non-friends. 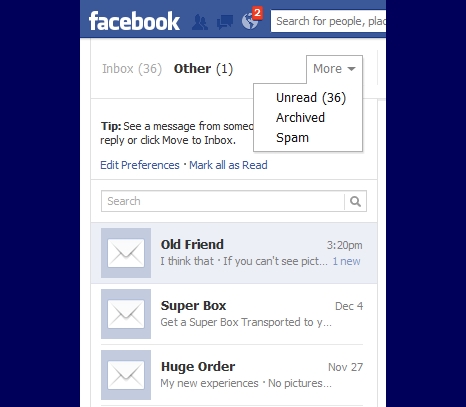 This new feature is currently tested out “with a small percentage of individuals” in the United States.

“Today we’re starting a small experiment to test the usefulness of economic signals to determine relevance. This test will give a small number of people the option to pay to have a message routed to the Inbox rather than the Other folder of a recipient that they are not connected with,” Facebook posted online.

There’s no information yet whether or not it will be offered to businesses in the future.

The fee, Facebook explained, should prevent people from receiving “unwanted messages.” It will ensure that messages route to the Inbox rather than in the Spam or Other folder which is often unnoticed or ignored.

“Several commentators and researchers have noted that imposing a financial cost on the sender may be the most effective way to discourage unwanted messages and facilitate delivery of messages that are relevant and useful,” the company stated further.

As a sender, for example, the feature enables you to contact “someone you heard speak at an event but are not friends with, or if you want to message someone about a job opportunity.” As a receiver, the trial allows you “to hear from people who have an important message to send” to you.

“In this test, the number of messages a person can have routed from their Other folder to their Inbox will be limited to a maximum of one per week,” Facebook added.

Will you patronize the service?