By Coolbuster
December 10, 2012earthquakelocalMindanaonews
A strong earthquake has struck in some parts of Mindanao on Monday, December 10, 2012. The United States Geological Survey said the quake was measured at 5.6 Magnitude. 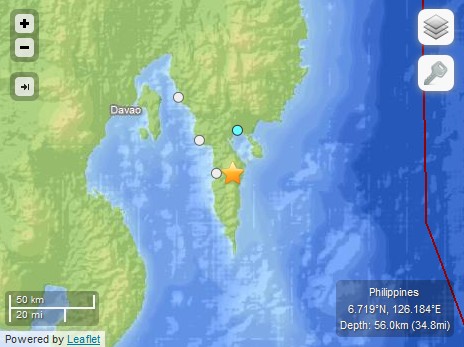 The quake, which has a depth of 56 kilometers (34.8 miles), occured at around 5:48 AM nine kilometers East of Talisay or 26km (16mi) South of Mati City, Davao Oriental in the Philippines, the USGS said.

Meanwhile, PHIVOLCS measured the quake, which was Tectonic in origin, at 5.8 magnitude and the epicenter was 65 km South of Malita, Davao del Sur.

Here are the intensity levels in the affected areas, according to PHIVOLCS:
Aftershocks are expected to occur but there is no tsunami alert, PHIVOLCS added. No damage to life and property has been reported so far.

Update: A strong aftershock occured at 8:18 AM.