Castillo’s brother had reportedly confirmed his death, but the specific cause has not been immediately revealed.

It was later known that he died of heart attack. Reports say he was brought to Pakil General Hospital at around 3 a.m. where he was declared dead on arrival. 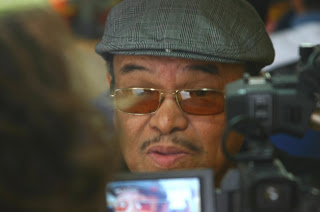 Born in Siniloan, Laguna on September 12, 1943, the veteran filmmaker studied at Manuel L. Quezon University and obtained his Bachelor of Arts degree in English Literature in 1964.

Castillo started as a writer for a komiks magazine. With the help of his father, he published his own magazine where he wrote all the stories from cover to cover, using different names as authors. A movie producer commissioned him to write a script on the character of " James Bandong ", named after Britain's superspy. The film made money and it was followed by a sequel, Dr. Yes, 1965, a spoof on the British film, Dr. No. He wrote and directed his first movie, Misyong Mapanganib (Dangerous Mission), in 1966.

The most memorable of his earlier films is Asedillo, 1971, based on a Filipino rebel of the 1920s who was hunted down as a bandit by the American colonial government. With this film, Fernando Poe, Jr. acquired the image that was to set him off as a legendary gunslinger, a defender of the poor and oppressed. Castillo also made Ang Alamat (The Legend), 1972, with Poe as a reluctant hero who battle a whole private army all by himself to defend his townfolks.

Succeeding Castillo films aspired towards thematic originality: small-town perversion in Ang Madugong Daigdig ni Salvacion (The Bloody World of Salvacion), 1975; incest in Tag-ulan sa Tag-araw (Rainy Days in Summer), 1975; political and period gangsterism in Daluyong at Habagat (Tall Waves, Wild Wind), 1976. Even his sex films had a to message to tell. One finds spiritual undertones in the story of an oversexed girl in Nympha (Nymph), 1971; a struggle of conscience in a stripteaser who laughed on the outside but cried on the inside in Burlesk Queen (Burlesque Queen), 1977; tribal conflict in Aliw-iw, 1979; a conflict of family values in Snake Sisters, 1983; and the politics of domination in Isla (Island), 1983.

Castillo won the Filpino Academy of Movie Arts and Sciences (FAMAS) awards for best director and best story for Pagputi ng Uwak, Pag-itim ng Tagak (When the Crow Turns White, When the Heron Turns Black), 1978, and also won the Urian awards for best director and best screenplay for the same picture. He shared the story credits with Ruben Nicdao, and the screenplay credits with Lando jacob, Ishko Lopez and Ruben Nicdao. He won the FAMAS best director trophy again in 1985 for Paradise Inn, a Lolita Rodriguez-Vivian Velez starrer. He also has a FAMAS best supporting actor award, for Sampung Ahas ni Eba (Ten Snakes of Eve), in 1984.