By Admin
October 23, 2012blogfake Top 20 schools in Philippines listfeatureI Am JammedMatts Cradlenewsprc
The Professional Regulation Commission stated Tuesday that it has not posted any article or announcement with the heading “TOP 20 SCHOOLS IN THE PHILIPPINES” on two blogs.

The PRC identified and specifically named “MattsCradle” and “I Am Jammed” as the sites who published the controversial list.

“The Commission stressed that it does not conduct a study on a 10-year interval and does not merge board exam results of all its regulated professions based on their average passing rates,” the PRC said in the disclaimer.

The bogus listing, which showed three University of the Philippines campuses on top of the ranking claimed “This statistics is a result of the study conducted every 10 years by the Professional Regulation Commission (PRC) and the Commission on Higher Education (CHED), based on the average passing [rate] in the BOARD EXAMINATIONS OF ALL COURSES of all universities and colleges in the Philippines. - latest as of October 2012.” 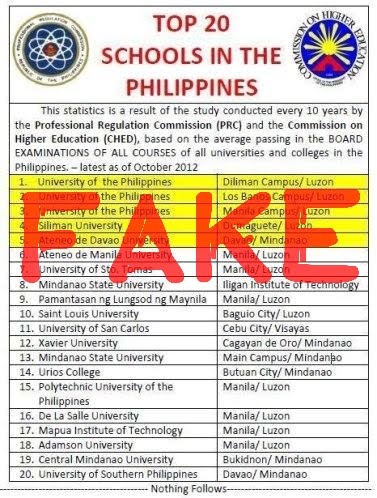 The PRC added: “Any information/updates concerning the Commission, are posted only in this website,” referring to prc.gov.ph, the agency’s official web portal.

On Monday night, the PRC through ABS-CBN’s late night news program “Bandila” informed the public that the viral list is fake.

The two blogs mentioned by PRC already asked an apology for the questioned list. “I apologize if it has [misled] my visitors in some way,” one of the blogs wrote.