Checkpoint up to protect gov't websites from cyber attacks

By Admin
October 05, 2012anti cybercrime lawCybercrimes Prevention Act of 2012e-checkpointGovernmentinternetnewsPhilippineswebsite
Amid threats from hacktivists protesting the Cybercrime Prevention Act, the government has installed an online ‘checkpoint’ to protect its websites.

One of the sites with an ‘e-checkpoint’ is the Official Gazette (www.gov.ph). Internet users who access the site will first pass a browser checking system before getting automatically redirected to the homepage after a few seconds. 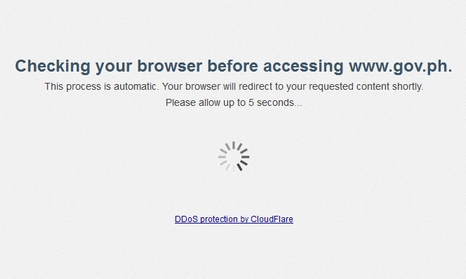 “We continue to adopt appropriate security measures to ensure the integrity of our websites,” Coloma said in response to reports saying government sites were attacked.

Coloma also made clarifications over reports that said that the Office of the President (www.president.gov.ph) website became inaccessible to the public as of 7:50 p.m. Wednesday, with visitors getting an error message.

The President’s website has undergone a scheduled systems maintenance that lasted for about five hours in the morning of October 3, he said, explaining that during this period, Facebook fans and Twitter followers of the President were duly re-directed and were able to use these social media channels without any interruption.

Coloma denied reports that other government websites including the Philippine information Agency have been hacked or defaced, but admitted that a hacker had accessed a PIA editor’s personal email account.

“There was no actual defacement of the PIA website and at no time was there a service disruption. In the morning of October 2, a hacker apparently got into the personal email account of one of the online editors and inserted a link that appeared in one of the posted stories,” Coloma said, adding that the specific issue was immediately addressed.

Some online and offline groups questioned and opposed the new law, saying that particular provisions on online libel may threaten the public’s right to freedom of speech.